Showing posts from 2009
Show all

December 22, 2009
Most of the GDC09 materials (presentations, demos and videos) are now available on our community web site www.devlifestyle.net
Post a Comment
Read more

December 19, 2009
I started uploading the videos i shot at the GDC, it will take a while to finish all the uploads, you can check our DevLifeStyle community web site for the latest videos. Please if anyone has some pictures or photos that he wants to upload, contact me directly
Post a Comment
Read more

December 17, 2009
During the preparation for my session in GDC09, I developed Azure Reader, a cloud based RSS based on Windows Azure, I developed it as a sample application or demo for Windows Azure, Unfortunately i didn’t have time to demo this application, what i will do is that I’m going to post the code soon (after doing some cleanup) with some posts that explains the application so that it may help you in your future azure development endeavor :). you can access the application here http://azurereader.cloudapp.net/ It uses LiveID for authentication so you can immediately start using it if you have a LiveID account, please note that your feeds subscriptions may be deleted at any time cause i frequently update the application
Post a Comment
Read more

December 16, 2009
Yesterday was the last day in Microsoft Gulf Developers Conference 2009 (GDC’09). it was an awesome experience, it’s amazing to meet this number of developers and communicate and discuss with them the different technologies. the developers community in Saudi Arabia is becoming more mature. I would like to thank all the people who attended the event, you are the reason that this event succeed. Please keep an eye on the DevLifeStyle Community web site for the event materials (videos, presentations, demos)
Post a Comment
Read more

December 12, 2009
Tomorrow at 9:00 AM Microsoft Gulf Developers Conference ( GDC’09 ) will start , i will deliver a Chalk Talk session tomorrow at 04:15 PM, in this  session me and Mohamed Halabi will discuss Cloud Computing and the Azure Platform, If you need any advice, help or support regarding any Microsoft technology or if you feel you like to chat or even have fun (yeeh real fun), please drop us a visit at the Community Lounge located inside Microsoft Innovation Center (MIC), at the Community Lounge you will find many experts from the local communities and other speakers hanging out. hope to see you all there.
Post a Comment
Read more

December 03, 2009
As you may know Windows Azure will go live starting from January 2010 and the billing will start from February, MSDN Subscribers can find information about the available azure benefits granted for them in this post http://msdn.microsoft.com/en-us/subscriptions/ee461076.aspx Now all i need is just a MSDN Subscription :)
Post a Comment
Read more

December 03, 2009
I spent around 1 hour trying to resolve an error that i received while trying to query a table in Windows Azure Tables, the query was something like this this .Users.Where( s=> s.UserID==userID).ToArray(); the error i received System.Data.Services.Client.DataServiceQueryException was unhandled by user code Message= "An error occurred while processing this request." InnerException: System.Data.Services.Client.DataServiceClientException Message= "<?xml version=\"1.0\" encoding=\"utf-8\" standalone=\"yes\"?>\r\n <error xmlns=\"http://schemas.microsoft.com/ado/2007/08/dataservices/metadata\">\r\n <code>InvalidInput</code>\r\n <message xml:lang=\"en-US\">One of the request inputs is not valid.</message>\r\n </error>" after some research i found the following in the Azure SDK Characters Disallowed in Key Fields The following characters are not allowed in values for the
2 comments
Read more

November 18, 2009
Register Online before December 10, to get a FREE pass to the Gulf Developers Conference. Register Here
Post a Comment
Read more

November 11, 2009
Gulf Developers Conference 2009 (GDC '09) is the largest Microsoft developer event in the Gulf region. This is a 3-days conference that is expected to attract more than 2,500 attendees from Saudi Arabia and near-by Gulf countries starting from December 13 to December 15, 2009. The conference will be held at Al-Yamamah University, on the same premise of the new Microsoft Innovation Center in Riyadh, Saudi Arabia. With the current release of latest new Microsoft technologies (e.g. Win7, Expression3, SL3), and the intense anticipation for upcoming Microsoft technologies (e.g. Office 2010, sharepoint 2010 & VS2010), GDC’09 is expected to attract the attention of many developers in the region. Attending GDC'09 will provide you with early access to key developer platform technologies. Moreover, GDC’09 will offer IT & Development Managers with a unique experience to learn about new technology directions from Microsoft and how such technologies can be used to maximiz
Post a Comment
Read more 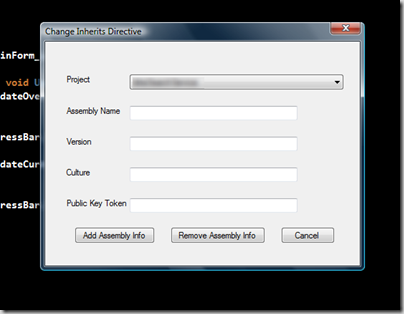 Jamil Haddadin has an excellent post on how to perform ASP.NET related development with Visual Studio extensions for Windows SharePoint Services. However during the development phase and due to the frequent changes we make it’s more efficient to work with the ASP.NET application directly, that will be much easier than the “coding/deploying to SP/testing” cycle you will use if you worked with the VSeWSS. When you use the method described by Jamil you will find that you will not be able to build the ASP.NET application because of using strongly named class names in “Inhertis” attribute of the Page/Control directives. To resolve this i don’t add the assembly name part in the “Inherits” attribute i just put the class name like the following <%@ Page Language= "C#" AutoEventWireup= "true" Inherits= "MyApp.Portal.Forms.Customers" MasterPageFile= "~masterurl/default.Master" %> This will allow you to successfully build and run the
1 comment
Read more

September 01, 2009
I ran into this strange problem today,if you have a visual studio solution that contains both a Reporting Services project and a SharePoint (VSeWSS) project you will have problems when you try work with the WSP view you will receive the following error “Error parsing Solution. Value does not fall within the expected range.” To resolve this you have to remove the reporting services project from the solution!!! in my environment i have VS2008 with SP1 and VSeWSS 1.2 (or 1.3). Anyone has any explanation for this behavior??
1 comment
Read more

April 29, 2009
If you would like to learn Team Foundation Server, follow my series of articles available on the DevLifeStyle Community web site. currently there are three articles in this series available here ( part1 , part2 , part3 )
Post a Comment
Read more 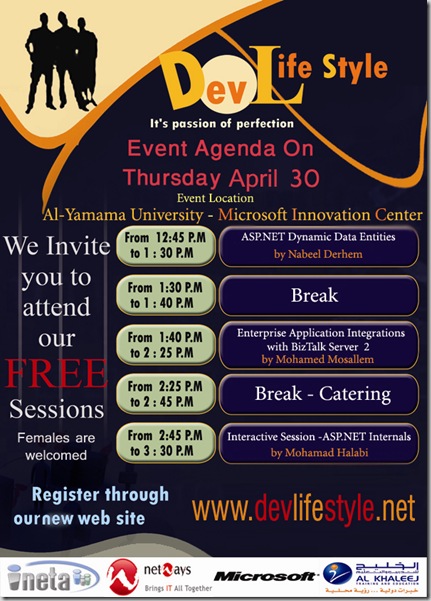 Join us on Thursday to get a chance to Win an XBOX 360 and other valuable gifts.
Post a Comment
Read more

April 11, 2009
Recently i installed TFS 2008, there are some tips that i wanted to share with you : - If you are going to use SQL Server 2008 on your data tier you must install SP1 for Team Foundation Server, if this is the first time to install TFS, you should integrate the SP1 files with the TFS installation, you can find more on how to do this in the installation guide - The reporting services must be installed on the application tier - There's a known bug regarding the TFS reports with SQL Server Reporting Services, you can get a hotfix for this from Microsoft support, refer to this knowledge base article for more info http://support.microsoft.com/kb/968905
Post a Comment
Read more

February 03, 2009
In the previous post we discussed how we can call server side web/WCF services from JavaScript. in this post we will discuss how we can use Java Script Object Notation (JSON) to send/receive objects between client side JavaScript and server side services JSON JSON is a text based, human readable, platform independent data exchange format. it’s build on JavaScript object notations which allows you to define an object as a list of members and values that are enclosed in curly braces ( {} ), each member is delimited by a comma. Within each member, the name and value are delimited by a colon ( : ). the following example shows how you can define the object Car <script type= "text/javascript" > function DisplayCarInfo() { var car= { "Name" : "Mondeo" , "Model" : 2009, "Maker" : "Ford" , "Drivetrains" : "RWD" }; alert(car.Name); alert(car.Maker); alert(car.Model); alert(car.Drivet
Post a Comment
Read more

Consuming Services from Client Side JavaScript (Part I)

January 31, 2009
Many frameworks allow you to easily call a server side service from JavaScript directly, services are called asynchronously from JavaScript so when you call any service method from JavaScript you can supply two extra parameters to the method in addition to the original method parameters, the first one is the name of a javascript function that will be called once the result of the service method is received, and the second one will be called incase an error happened on the server. In this post i will explore the options available to consume a service from client side JavaScript. - Calling a page method: ASP.NET AJAX allows you to call public static methods available on your aspx page directly from JavaScript, you have to mark these methods with the [WebMethod] attribute and set the EnablePageMethods property of the script manager control to true. the following example demonstrates this //Default.aspx.cs [System.Web.Services.WebMethod] public static string GetTemprature( string cit
Post a Comment
Read more
More posts

Mosallem
Riyadh, Saudi Arabia
a Development Lead based in Riyadh, working with the .net Framework since its early beta in 2000, specialized in developing Enterprise .net Applications and Enterprise Applications Integration, a community board member and regular speaker at DevLifeStyle the first .net users group in Riyadh, Follow Mosallem on Twitter